Dr. Barlow in his book identifies the 'The Hump' as the most critical part of the human body in terms of posture. He brings this point to the reader's attention very early in the book (Page 27 in the Arrow edition of 'The Alexander principle', 1975)

.. The astonishing thing is that the most important Use-area we possess, from the Alexander point of view, has no common name. My task of describing Use would be greatly simplified if there were a simple commonly  accepted name for the area of the body in which Alexander first detected a fundamental misuse, an area which is indeed the Clapham Junction of Use.

It is the region of the body where the back of the neck joins the upper back, and it is a prominent area in everyone because here the shape  of the neck vertebrae alters and the spinous  processes  become more prominent. Figure 3 shows it in profile and plates 10a, 10b and 10 c show it in a young child, a lady, and a middle-aged man.

This whole region at the base of the neck, both back and front, is a veritable maelstrom of muscular co-ordination. It is here that those most inadequate evolutionary adaptations  - the shoulders and upper arms - will exert their distorting influence during the many activities in which we engage. It is here that faulty patterns of breathing throw the muscles of the lower neck and upper ribs into excessive spasm: it is here that mechanisms of speech and swallowing  require a reasonably good vertebral posture if the oesophagus and trachea and associated vocal structures are to function well. It is close to here that blood vessels and nerves of great importance and great complexity will pass - blood vessels to the base of the brain, nerve ganglia which affect breathing and heart rate and blood pressure, nerve roots which  with increasing age become more and more liable to compression: it is here that 85% of the readers of this book will have arthritis by the time they are 55 (and many of them much younger than that): and it is from here that the head itself - the structure which carries man's most important sensory equipment of sight and hearing, taste and smell, and balance - has to be coordinated at rest and in movement.

And it is here that mis-use most frequently starts: it is here that we have to start if we are to correct the multitudinous mis-uses which the rest of the body can throw up. In terms of the Alexander Principle, it is only when this primary mis-use is dealt with that we shall see the answer to an expanding range of questions. .......


It is very probable that in just one or two joints, somewhere between C7, C8, and T1, T2, T3, there will be a very sharp turn in the wrong direction. Although Dr. Barlow identifies the problem as primary to correcting posture, my feeling is that general misuse will camouflage this problem and a person will not be able to perceive that there is a problem till a lot of correction has been done in the rest of the body. I have always wondered what Dr. Barlow was trying to convey; It is only now, with my experiment, that I am able to get some feeling in this region. (Please note that the nerves leading to the hands come out in this region - may explain why some computer users are likely to end up having carpal tunnel syndrome).

It is puzzling that despite awareness of this problem, Dr. Barlow in his book does not discuss how we ought to sleep - use of pillows, etc.. (the word 'sleep' does not appear in the index).

Since the problem of posture is not properly understood, it is safer to experiment with the aim of freeing all parts of the body, so that balance is achieved over its full length. Evidently the hump will form an important part which we will have to integrate with the rest of the body sooner or later.

Unfortunately, in human society, the hump is mostly assumed as being something normal, even something that could enhance a person's beauty: 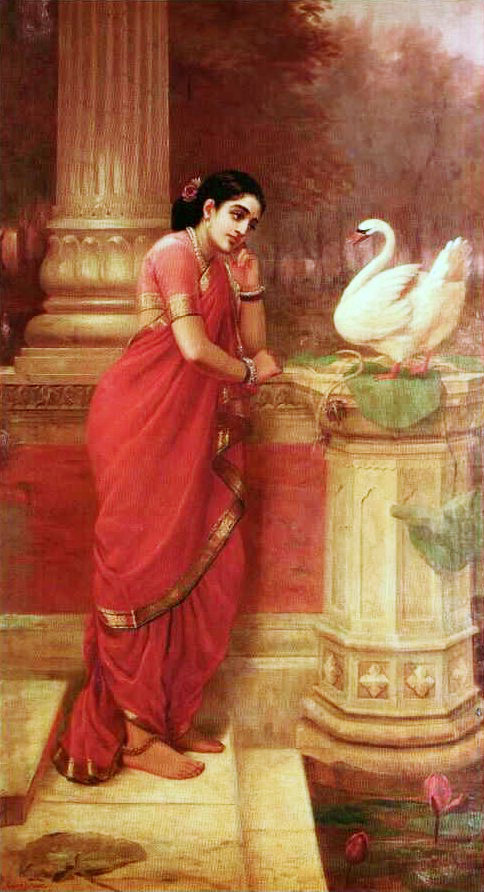 ... The famous painting of 'Damayanti and the swan messanger' by Raja Ravi Varma.

Dr. Barlow's book 'The Alexander Principle' has a figure 2 (fig 11 in 'The Alexander Technique), which form part of sections on 'neck collapse' and 'SLUMP' in the two versions respectively.

I visualise the concept of 'neck collapse' and 'SLUMP' as 'locking of the body', which can occur in any contiguous portion of the body. It can occur at the ankles, it can occur over a combination of the ankle and knees and so on. I am presently sorting out this problem in my abdominal region (which also involves the gluteal and thigh muscles).

When we lock the body in any region we produce a very non-linear structure, which is difficult to integrate with the rest of the body.

The remedy is to figure out how to balance the body correctly, which gets rid of the non-linearity and helps improve the relationships between different parts of the musculoskeletal system.

Unfortunately locking parts of the body is part of our cultural heritage.